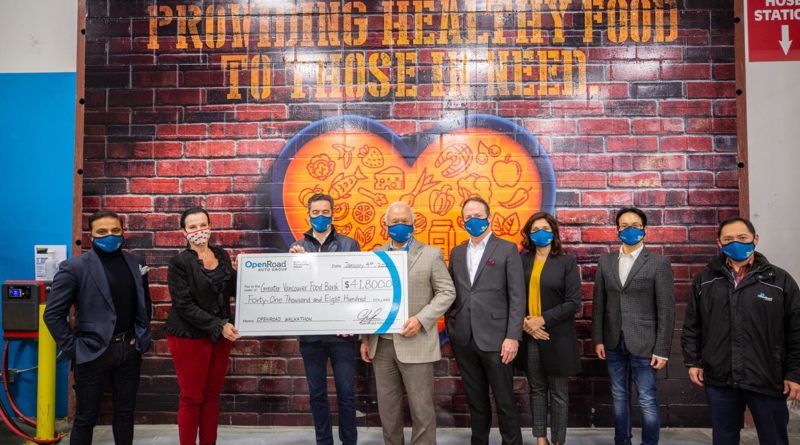 OpenRoad Auto Group announced that dealership staff and corporate employees raised close to $47,000 for local food banks in British Columbia and Ontario during the company’s inaugural OpenRoad Walkathon. Hundreds of OpenRoad staff associates from dealerships in the GTA and Metro Vancouver as well as head office employees in Richmond, B.C., participated in the charitable endeavour from December 2-14th which saw OpenRoad donate $5 for every kilometre walked based on staff donations and company matching funds.

“We’re so proud of our entire team for hitting the pavement to raise funds for their local food banks,” said Christian Chia, CEO, OpenRoad Auto Group. “We’re really pleased to step up and do our part to help feed families that are in need of nutritious meals. It’s been a challenging year for local food banks due to increased demand resulting from the pandemic.”

Food banks in all regions are experiencing a significant decline in contributions while the need for support has increased during the pandemic. The Greater Vancouver Food Bank (GVFB) supports around 6,000 people every week through their direct distribution across Vancouver, Burnaby, New Westminster and the North Shore. In the same communities, the GVFB also provides food support to around 21,000 people through their community agency partners that includes after school programs, homeless shelters, transition houses and more. A quarter of GVFB clients are children and youth, and 18% are seniors. The GVFB often has twice the purchasing power, and sometimes even four times the power when they purchase items like eggs, apples and onions.

The Greater Toronto Area Food Banks serve a combined 200,000 clients every year with contributions down and clients in need up by 22-200 per cent by region. The GTA Food Banks report that 67% of clients skip meals each day to pay for other necessities like rent. For every dollar donated, the Greater Toronto Area food banks will be able to provide food to hungry children, seniors, families and neighbours.

OpenRoad’s food bank donations were allocated to local food banks based on funds raised per region. On January 4th, OpenRoad’s Vancouver team presented a donation of $41,800 to the Greater Vancouver Food Bank, while OpenRoad’s Brampton team will present $5,000 to the GTA Food Banks later this month.

March 9, 2020 Tom Venetis Comments Off on Dilawri Group Of Companies Partners With Brian Ross In Ferrari Maserati Of Vancouver

July 25, 2012 The Premier Publications Team Comments Off on New Mazda6 to premiere at Moscow Motor Show