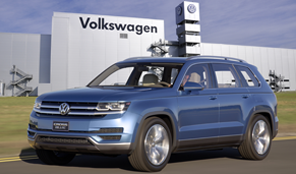 VW’s Chattanooga, Tennessee plant will start producing the seven-seat vehicle, yet to be named, at the end of 2016. The plant also produces the Passat.

“The United States of America is and will remain one of the most important markets for Volkswagen. Over the past few years, we have achieved a lot there.

“We are now launching the second phase of the Volkswagen campaign in the US. With the midsize SUV, the expansion of the Chattanooga plant and the new development center, the focus is on the wishes of the US customer.”

Dr. Martin Winterkorn, chair of the VW management board said “the Volkswagen brand is going on the attack again in America.”

Michael Horn, president/CEO of VW Group America said the SUV would “allow us to fulfill the wishes of our dealer network, bringing new customers to our showrooms and additional growth for the brand.

”As well, the automaker announced it would open a new, independent national R&D and planning centre for project coordination in the North American market.

The objective is to respond to customer feedback and see to it that existing and planned models reflect that feedback.

This will lead to the creation of approximately 200 engineers working in Chattanooga.

The automaker said this decision is another element in the investment program that the Volkswagen Group launched in the region.

From 2014 to 2018, the Volkswagen Group will be investing more than US$7 billion in the US and Mexico.

Trump’s fuel economy rollback leaves Trudeau in a bind: Follow the U.S., or take a stand

April 4, 2018 Jackson Hayes Comments Off on Trump’s fuel economy rollback leaves Trudeau in a bind: Follow the U.S., or take a stand