Mercedes-Benz USA CEO Steve Cannon confirmed last month that the luxury automaker would be adding a convertible, diesel and hybrid-powered models to its C-Class lineup following its next redesign.

Cannon, who shared the product information during an interview with Automotive News, said the company was fighting BMW’s 3 Series with “two arms tied behind our back,” referring to how BMW offers the 3 Series as a sedan, coupe, convertible, station wagon, diesel and hybrid in the U.S. (BMW offers the 3 Series in sedan, touring, coupe, hybrid and cabriolet models in Canada).

The last redesign of the popular C-Class hit markets in the fall of 2011. The high-volume unit was a winner right out of the gate for Mercedes-Benz helping set a sales record in Canada in 2011 and then breaking that tally in 2012 with passenger car and light truck sales hitting 30,106 last year. (Mercedes-Benz and smart combined sales hit 35,505 units marking a 7.9 per cent jump in 2012).

On the heels of that success, Cannon said the C-Class would be redesigned and hit the market next summer in the U.S. followed by a convertible version in 2015.

He did not reveal when the diesel and hybrid models would hit the market.

When asked if any of those proposed models would hit Canadian dealerships, Mercedes-Benz Canada reps stressed that it was very early to talk about any changes down the road for the C-Class.

“At the moment, we are focusing on launching the new family of E-Class models, the CLA, the new generation S-Class and also the GLA,” explained JoAnne Caza, director of communications and PR for Mercedes-Benz Canada. “As for the next generation C-Class, it's still very premature to share these details for the Canadian market.”

She added the face lifted C-Class sedan and coupe models continue to do extremely well, accounted as the automaker’s best sellers in Canada followed by the GLK-Class.

“Rest assured that we will make some noise about future products when we have more confirmed information to share.”

Cannon also confirmed that Mercedes-Benz’s factory in Tuscaloosa, Alabama is being expanded to produce the C-Class for North America starting next year. He told the magazine that production capacity would be pegged at 100,000 units annually.

Romano out as Mazda Canada president

July 4, 2012 The Premier Publications Team Comments Off on Romano out as Mazda Canada president 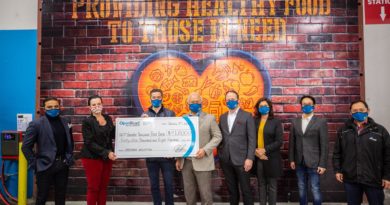