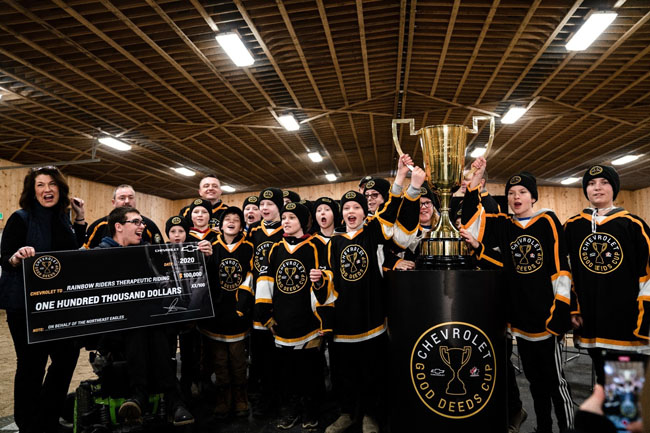 The Northeast Eagles Peewee hockey team from Torbay, Newfoundland was announced as the champion team of the 2019/20 Chevrolet Good Deeds Cup season in a surprise celebration at the Rainbow Riders Therapeutic Centre.

Now in its fourth year, the Chevrolet Good Deeds Cup is a program that empowers Canadian Peewee hockey teams to conduct good deeds in their community.

“The Chevrolet Good Deeds Cup has become more than a program or promotion, it’s become a movement,” said Laura Pacey, brand director for Chevrolet Canada. “It is about creating a rallying cry to inspire good deeds and the Northeast Eagles exemplified that in every sense of the word. What they accomplished for their community, with their community, is truly remarkable.”

The Northeast Eagles were one of hundreds of teams from across Canada who entered the competition by submitting a video of their good deed and the work this team accomplished was significant. Together, they raised $21,500 for The Rainbow Riders Therapeutic Riding Centre, which helps children in Newfoundland and Labrador with physical, cognitive or emotional disabilities. With the money raised by the team and their community, the centre was able to offer a free week of horseback riding to all participants and purchase a much-needed utility vehicle.

As winners of this year’s Chevrolet Good Deeds Cup, the team received a grand prize of $100,000 that will be donated to The Rainbow Riders Therapeutic Riding Centre. Each player’s name is engraved on the cup to commemorate their efforts. The team has also received national recognition during a broadcast of Hockey Night in Canada to celebrate their achievements.

December 16, 2010 The Premier Publications Team Comments Off on Honda Canada not involved in massive Fit recall