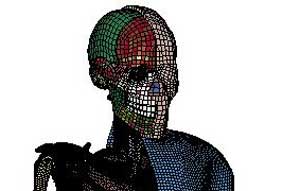 Call it the smarter crash-test dummy.

The Toyota Motor Corporation announced last week the latest version of a “virtual human model” that would allow for detailed analysis of internal-organ injuries caused by automobile collisions.

According to Toyota, internal organs are particularly vulnerable during collisions, with injuries to them accounting for approximately half of all sustained during automobile collisions.

To develop Version 4, the automaker says it worked with outside research institutes including universities and utilized a “high-precision computed tomography (CT) scanner to make detailed measurements of the internal structure of the human body.”

By creating precise models of various internal organs, as well as the positions of and relations between those organs, Toyota “created a virtual human model containing approximately 14 times more information than the previous version.”

Version 4 can simulate in greater detail how, during a collision, areas of the torso may be affected and internal organs can be damaged.

The use of the THUMS will help researchers develop and improve safety devices like seatbelts and airbags.

More digital engagement than ever at NADA Show 2018

January 4, 2018 Jackson Hayes Comments Off on More digital engagement than ever at NADA Show 2018