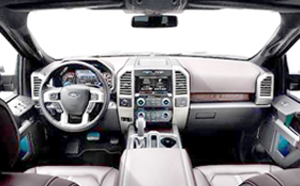 Despite two more selling days than last year, December vehicle sales in Canada turned in the market’s first and only losing month of 2015.

But the decline was a modest 1.9 per cent, and December’s count of 129,000 sales was still substantially above the previous 10-year average for the month. More to the point, the setback was too little too late to put the brakes on another record year for the Canadian market.

At just a shade under 1.9 million, combined car and light-truck sales rose 2.5 per cent above 2014’s tally and made it three record years in a row.

Last year will also go down in the books as the year FCA topped the sales charts for the first time. Ford consoled itself with best-selling brand kudos, but Oakville never really came close to extending its six-year streak as overall sales leader. While December saw Windsor extend its own streak of monthly sales gains to 73 months, Oakville sagged 13 per cent in December. That handed FCA a cushion of more than 14,000 units over Ford for the year.

With its extensive light-truck portfolio, FCA was well placed to exploit the market trend away from passenger cars. Striking enough that the light-truck share of the overall market grew to 62.3 per cent from 58.7 per cent in 2014; at FCA, it was a remarkable 87 per cent. Industry-wide, car sales shrank 6.3 per cent while light trucks surged 8.8 per cent.

Many of the vehicles driving the shift to trucks hardly fit traditional notions of a truck. They include the new breed of subcompact-car-based crossovers like the Honda HR-V, Mazda CX-3 and Jeep Renegade, each of which found eager buyers without cannibalising sales of their respective compact CUV siblings.

Overall the small-crossover segment expanded 12 per cent in 2015 to become emphatically the biggest selling vehicle category in Canada. Yet there were five other segments that grew even more – in percentage terms – than that. Topping them was the small(er) pickup category, which ballooned 78 per cent following GM’s return to the segment with the Colorado/Canyon twins.

Equally remarkable is the fact that despite strong new entries, the old-timer Toyota Tacoma grew its sales 18 per cent and retained its leadership of the class.

Although the actual numbers remain modest (about 25,000), the rebirth of the smaller-pickup segment helped grow total pickup sales 4.8 per cent even though the full-size pickup category alone grew by a market-lagging 1.6 per cent.

While large, luxury and intermediate SUVs all also handily outpaced the overall market, there was also surprising growth in sporty cars, both lower-end ones (up 13 per cent, led by Mustang and MINI) and high-end (23 per cent, driven by BMW 4 Series and Corvette).

Such is Ford’s dominance of the top-selling nameplates chart that F-150 still led by a country mile, despite seeing its sales dwindle by 5.8 per cent while the challenging GM pickups advanced 11.3 per cent.

Likewise Ford Escape was one of the few compact crossovers to lose sales in 2015 (down 8.6 per cent) yet it still held off the hard-charging Toyota RAV4 as small-SUV segment leader.

Among other top-selling models, Honda Civic made it 18 years in a row as the nation’s favourite passenger car, while Hyundai Elantra just took the Toyota Corolla for the runner-up spot by a nose.