Dodge is back in the North American compact sedan segment as it sets to pull the wraps off the all-new 2013 Dodge Dart at the 2012 North American International Auto Show in Detroit next month.

Adapted from the Alfa Romeo Giulietta, the Dart also marks the first Chrysler Group vehicle based upon Fiat architecture.

The all-new Compact U.S. Wide (CUSW) architecture underpinning the Dart is a state-of-the-art architecture with an industry-leading 68 per cent of the body composed of high-strength steel, resulting in a rigid structure. The vehicle also boasts four-wheel independent suspension and available 18-inch wheels.

Dodge says the Dart marks its re-entry into the compact sedan segment, though it only recently ended production of the Caliber in the U.S. with the remainder of the units being sold as 2012 model year vehicles.

Chrysler says MultiAir technology delivers “optimum combustion” at any speed under all driving conditions by allowing direct control of air intake and combustion.

“The result is up to a 15 per cent increase in low engine rpm torque, a 7.5 per cent improvement in fuel efficiency and a 10 per cent reduction in C02 emissions.”

Chrysler says the unit will be built at the Belvidere Assembly Plant in Belvidere, Ill. The company is in the process of investing $600 million to support the production of future products, including the 2013 Dart. 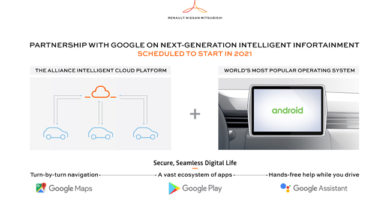 Renault-Nissan-Mitsubishi and Google Come Together On Next-Generation Infotainment

September 19, 2018 Tom Venetis Comments Off on Renault-Nissan-Mitsubishi and Google Come Together On Next-Generation Infotainment