That represented a gain of 11.3 per cent over a year-ago month that was itself a record-breaker. Over the previous 10 years, July sales have averaged just fewer than 146,000 units.

The sales surge was far stronger than would be explained by this July having one more selling day than the same month a year ago. And it was enough to push the year-to-date total to 4.1 per cent in front of this point last year.

Detroit did most of the heavy lifting in July, led by GM’s 25.1-per cent surge. With Ford advancing 15 per cent and Chrysler up seven per cent, Detroit’s combined sales rose 14.8 per cent, compared with an 8.6-per cent combined gain for everyone else. Both GM and Ford had employee-pricing campaigns running during July.

Ford out-sold Chrysler by about 1,000 units in its best July ever, but still hasn’t managed to overtake its rival for year-to-date sales supremacy. The gap has narrowed to about 1,400 units.

While GM’s strength was evenly shared between cars and light trucks, its provincial rivals both went overboard on the truck side: Ford truck sales flourished by 26 per cent while its car sales withered 16 per cent; a similar pattern at Chrysler saw it sell seven light trucks for every one passenger car it sold.

With the import brands also growing their truck sales a little faster than car sales, the light-truck category accounted for 58 per cent of the market in July and year-to-date. That trend included a third consecutive record month of truck sales for Toyota.

Among the offshore makers, a number of traditionally strong luxury brands lagged the market. Acura, Jaguar, Lexus, Mercedes-Benz and Volvo all posted sales declines. Audi, however, was boosted by the return of the A3 to the lineup; Lincoln sales jumped 41 per cent with the first full month of sales of the new MKC (246 sold); and Land Rover surged 56 per cent.

With the return of the Audi A3 and Mercedes having its B-Class and CLA models, BMW is without a comparable entry-level four-door. The Richmond Hill-headquartered company still managed to advance its sales 15.7 per cent, including 41 debut-month sales of the X4 SUV Coupe.

GM nameplates posted many of the largest gains in July. The Chevrolet Corvette, Cadillac Escalade, Chevrolet Volt and Camaro, Buick Regal, Chevrolet Malibu, Cadillac XTS and Suburban/Yukon XL all at least doubled their sales over July 2013.

A highlight for Chrysler was all-time record sales for the Jeep Wrangler; at 2,797 sales in July, the venerable off-roader routinely achieves volume comparable with mainstream compact cars like the Chevrolet Cruze (2,861 sold in July).

Among the top-selling nameplates, the Ford F-Series continued to run away from the competition, while a strong month saw GM’s Silverado/Sierra twins make a giant leap toward reclaiming their traditional second spot from Ram.

In passenger-car sales, the Honda Civic padded its lead over one-time challenger Hyundai Elantra, which in turn was pushed down a spot in the overall rankings by the Dodge Grand Caravan. 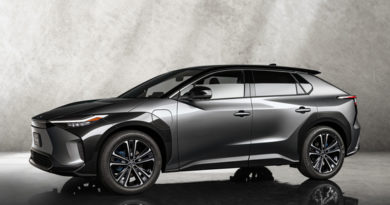