Huge trucks and full-size luxury sedans were almost non-existent, with compact and mid-sized vehicles taking the forefront, and all because the auto industry is starting to shift its attention to “next-gen” buyers.

Nowhere was this more evident than at Chevrolet, which showed the hot, new sub-compact Sonic RS and two compact concepts. Chevrolet will be inviting younger buyers to have their say during the design phase before the concepts become reality in one or two years time. The idea even has a name: co-creation.

In their research, Chevrolet found that 54 per cent of buyers 30 and under would rather be on social media with their friends than driving.

By shutting off the engine at stops, recapturing braking energy and smoothing torque during acceleration, this concept takes automotive electrification to the next level and balances turbocharged performance with fuel economy.

The three-door hatchback was designed to be an attractive-yet-affordable sports car.

The first tangible result of the Fiat-Chrysler marriage was the world debut of the 2013 Dodge Dart.

Ford held the world premiere of the 2013 Fusion in Detroit, calling it one of the most significant vehicles in its portfolio.

The Lincoln MKZ Concept is a styling study that rides on an all-new midsize platform shared with the Ford Fusion. The sedan is capable of utilizing multiple powertrain options in front-wheel-drive and all-wheel-drive configurations.
Like the recently introduced MKS and MKT with EcoBoost, the Lincoln MKZ Concept features Lincoln Drive Control and the sophisticated Continuously Controlled Damping (CCD) adjustable suspension.

Prior to the official opening of NAIAS, Cadillac held the world debut of the ATS sedan that is designed to go head-to-head with BMW 3 Series, Audi A4 and Mercedes C-Class.

The Cadillac-tuned, 2.0-litre direct-injected engine will produce an estimated 270 hp. At 135 horsepower-per-litre it is more powerful than the highest-performing engines from luxury competitors such as Audi, BMW and Mercedes.

The 2013 Buick Encore is an all-new, versatile five-passenger crossover that joins a rapidly expanding family of Buick vehicles that has recently seen the additions of the Verano compact luxury sedan, the Regal GS sport sedan, and fuel-efficient eAssist “light electrification” technology on both LaCrosse and Regal. 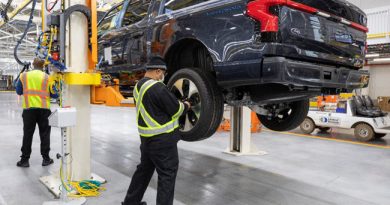 August 27, 2010 The Premier Publications Team Comments Off on Spyker reports loss in H1