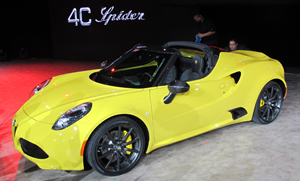 
DETROIT, MICH. – Over the more than 25 years I’ve been coming here for the annual auto show, I can’t remember the Europeans staging more world premieres in one day.

But that was the case Monday (Jan 12) at the first day of the North American International Auto Show that runs until Jan. 25.

Power, style, but most all, leading-edge connectivity dominated the European reveals.

A mid-engine turbo 1,750 cc four-cylinder engine with direct injection powers it with two intercoolers producing 237 hp and 258 lb/ft of torque for a top speed of 160 mph.

It is expected to start arriving in North America by mid summer.

Audi
Making its world premiere in Detroit was the new Q7 SUV that is 325 kg lighter than the current model, making it what Audi claims is the lightest vehicle in its class, even though exterior dimensions are unchanged.

It is also up to 23 per cent more fuel efficient due to enhanced TDI technology.
The Q7 models will be powered by the latest incarnation of the 3.0 TDI engine with 270 hp, which is capable of taking it from 0-100 km/h in 6.3 seconds.

BMW
BMW bought a bevy of Bimmers to Detroit with the world unveiling of the new BMW 6 Series Convertible and M6 Coupe, as well as showing the new 6 Series Coupe and Gran Coupe and M6 Gran Coupe.

For the 2016 model year, the third-generation of BMW 6 Series receives a range of enhancements that refines the character that is unique to model.

Now offered in three distinct body styles – traditional two-door Coupe, open-air Convertible and unique four-door Gran Coupe – all are again offered with a choice of BMW TwinPower Turbo engines, the 315 hp inline-six in the 640i models and the 445 hp V8 in the 650i models.

Mercedes-Benz
Seen for the first time in the world at Detroit is the Mercedes-Benz GLE Coupe, described as a new model in the lineup. It is noticeable by its steeply raked rear roofline.

In addition to the extensive amount of standard equipment on the AMG version, the Dynamic Select handling control system, the Sports Direct-Steer system and the driver assistance systems typical of the brand, the are standard with the 9G-TRONIC nine-speed automatic transmission.

MINI
The new John Cooper Works Hardtop had pride of place on the MINI stand in Detroit.

Power for the new John Cooper Works Hardtop is delivered by a 2.0-litre, four-cylinder that was developed based on the latest generation engine with MINI TwinPower Turbo Technology.

Porsche
Marking their world appearances in Detroit were the 911 Targa 4 GTS and Cayenne Turbo S that top the 911 Targa and Cayenne model lineup respectively.
With all-wheel-drive in the Targa GTS, the weight-to-power ratio with the 430 hp engine was improved from 3.9 kg per hp to just 3.6 kg per hp, compared to the S model.

The S60 shares the same increased ride height of 65 mm (2.5 inches) as the V60 and comes with the same capable All-Wheel Drive underpinnings of its sibling, making it the only truly capable and stylish all-road sedan crossover on the market.

The S60 Cross Country offers both 18- and 19- wheels with high profile tires that add both comfort and all-road aesthetics, reduce road noise, and add increased wheel protection when needed for city or country.

The S60 Cross Country will be powered by the T5 All-Wheel Drive gasoline powertrain delivering up to 250 hp, and is expected to be available on a limited basis this summer.

Volkswagen
VW held the world debut of the Cross Coupe GTE, which is actually a cross between a concept and a future model.

The model shown in Detroit is a five-seater, but it’s known than when the Cross Sport GLE comes next year, it will be a seven-seater.

Engine selection is still under discussion.

At Detroit, it was announced that the Volkswagen Golf was named the North American Car of the Year.