There is no doubt Canada is pickup truck country. Just ask Ford Canada, which announced it crossed the 100,000 sales threshold this week with its F-Series line.

To celebrate the milestone, Ford donated $10,000 to SickKids Foundation, a charity selected by Taylor. The automaker also said it would cover the cost of all maintenance and fuel for the first 100,000 kilometres on his truck.

“The F-Series has been Canada’s favourite truck for 46 consecutive years, but we have never sold 100,000 F-Series in a single year before,” said Dianne Craig, president and CEO at Ford of Canada.

One-hundred thousand F-Series trucks, lined up end-to-end would stretch right across the width of Alberta.

“I had heard a lot of great stories from colleagues about the service at James Braden Ford, so when I was looking to buy a truck I decided to stop by and see what they had. I fell in love with the F-150 immediately,” said George Taylor, purchaser of the 100,000th Ford F-series.

“When I got the call that I had bought the 100,000th truck this year I was blown away. And being able to donate to the SickKids Foundation was an added bonus. This has been an amazing experience.”
a 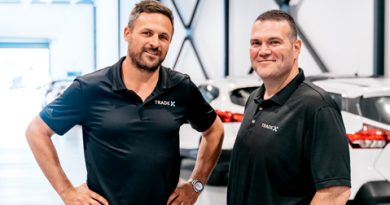