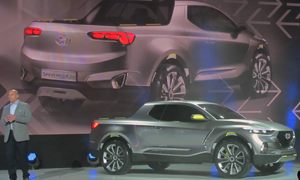 
DETROIT, MICH. – While Kia was quiet with no new offerings at the 2015 North American International Auto Show (NAIAS) in Detroit, its Korean partner Hyundai made up for it with the introduction of two new production cars and an innovative concept vehicle.

Hyundai introduced an all-new Sonata Hybrid model as well as a Sonata Plug-In Hybrid, the firm’s first plug-in hybrid. These 2016 models will be introduced in Canada later this year.

One of the surprises of the show, however, was the Santa Cruz Crossover Truck Concept, that may or may not see production at some point in the future.

If I was a betting man, I would say yes, but Hyundai uses shows like Detroit to gauge consumer reaction to new concepts and the Santa Cruz is another example of that.

Somewhat similar to Ford’s larger Explorer Sport Trac, the Santa Cruz is what Hyundai calls a “new interpretation of truck utility for the Millennials generation who now represent the second largest population of truck buyers.”

Designed for what Hyundai calls “urban adventurers,” the Santa Cruz offers seating for five along with the versatility of a truck bed in the rear, which can be covered by a lockable rigid tonneau cover. The cargo bed provides a separated storage area for things like dirty and smelly sports equipment and the like.

The back seat is accessed through rear-hinged rear doors that blend in seamlessly with the front door design.

The Santa Cruz features a nifty tailgate extension to increase the cargo bed to the equivalent of a mid-size pickup. However, the truck wasn’t designed with heavy hauling or towing in mind; the bed is there to offer greater utility for crossover and sedan buyers who want the utility without going to a full-fledged pickup.

The smallish footprint of the Santa Cruz compared with regular pickup trucks means it is easily maneuvered in tight urban parking lots and narrow city streets.
To this end, unique wheels as well as different front and rear fascias that help to improve aerodynamics are found on the new Sonata Hybrid.

Both vehicles will be built at the Asan South Korea plant.

For 2016, Hyundai has downsized the Sonata Hybrid from a 2.4-litre engine to a 2.0-litre Nu GDI four-cylinder engine. It is mated with a six-speed automatic transmission. This transmission houses a 38 kW electric motor and clutch that helps the vehicle deliver similar driving characteristics while improving fuel economy because of the bigger electric motor.

The Sonata Hybrid is capable of operating on electric power alone, even on the highway by decoupling the gasoline engine from the drivetrain.

Hyundai has also improved this model by placing the 13 per cent smaller battery pack under the trunk floor, thereby allowing for a flat trunk floor and producing 380 litres of cargo space, 10 per cent better than the outgoing model.

The Sonata PHEV will have a 50 kW electric motor in the transmission in place of the torque converter, allowing for longer and higher-speed use of EV mode. Like the regular Sonata Hybrid, this car has a 2.0-litre Nu engine that takes over when battery power is depleted.

Buyers of the Sonata PHEV will be eligible for provincial tax credits in Ontario and Quebec.

Pricing for both models will be announced closer to the launch dates. 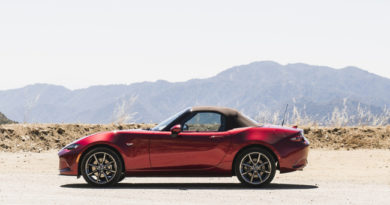 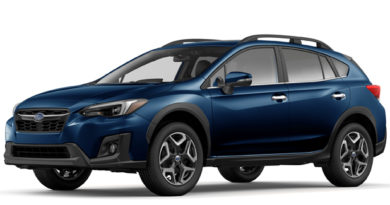