VW Canada and its dealers couldn’t have picked a better month to get nostalgic over the arrival of the first Bug on our shores in 1952. VW dealers sold 4,807 cars and light trucks, 6.3 per cent over last July.

And VW wasn’t the only automaker celebrating. Chrysler trumpeted its 32nd consecutive month of year-over-year sales growth with another strong showing in July, good enough for the number 2 selling company in Canada.

When Fiat 500 sales cooled – down nearly 13 per cent from last July, the accordion-roofed Cabrio sales were up nearly 215 per cent to 240 from 77 last July.

Ford posted its best July sales in 33 years adding it again reigned supreme as the top-selling automaker for the month and year-to-date.

The Blue Oval said it did well in the pickup market as its F-150 sales were up 26 per cent over last July.

Sticking with the domestics, General Motors boasted a list of models from the Equinox (five per cent), Buick (19 per cent for the calendar year), Terrain (12 per cent) and Sierra (2.5 per cent) and SRX (four per cent) that all enjoyed a solid summer month.

But the General had to admit July sales were down overall by 5.6 per cent over last July – though these stats were unadjusted given two fewer sales days this July.

But every automaker had to contend with two fewer selling days.

If there is a concern, it’s the cost of those sales.

Carlos Gomes, a senior economist at Scotiabank, told the CBC sales were strong in July and didn’t falter much after an “exceptional” June.

“We are at very healthy levels,” said Gomes. “But it is being supported by the generous incentive levels.”

Those incentives — such as zero per cent financing and employee discount programs  — helped bring buyers back into the market after the European financial crisis that weakened sales in April, said Gomes.

It was essentially good news all around for import brands in July as the Europeans, Japanese and Koreans all enjoyed positive growth.

Toyota led the way with a 30 per cent jump to 15,819 units (when combined with Lexus) while Honda/Acura followed closely with a 26.8 per cent gain.

“While the story of Japanese recovery has been told primarily through the larger brands, lower volume OEMs Subaru (23.3 per cent) and Suzuki (9.8 per cent) flexed their market muscles last month,” auto analyst Dennis DesRosiers said.

Nissan/Infiniti (down 29.3 per cent) and Mitsubishi (down 16.4 per cent), were caught at weak moments in their product cycles and have yet to join the Japanese rally.

The picture from the Korean brands was positive but understanding the results requires some digging. Kia finished up 20.4 per cent and continued to gain in crowded segments. Hyundai’s 0.8 per cent gain should be viewed in context; not only was 2012 the brand’s best July on record, but it comes on the heels of an exceptionally good 2011 showing.

On the luxury side, DesRosiers pointed out that a mix of solid product lineups, low borrowing costs and a relatively stable economy helped push the higher end of the market upward in July.

Audi enjoyed a 14 per cent gain and nearly bested BMW in the passenger car sales (1,031 for Audi compared to 1,058 for BMW). The battle for luxury volume supremacy between Mercedes-Benz and BMW had the latter coming out on top with 3,130, though Mercedes-Benz did sell more passenger cars (1,289).

Land Rover enjoyed a big gain, relatively speaking, with a 49 per cent jump while its cross-showroom cousin Jaguar slipped 22.5 per cent with just 55 units sold in July.

Porsche had its strongest July ever with a 26.5 per cent jump thanks to the meteoric sales leap of more than 200 per cent by the Boxster.

But while some go up, others must go down. Volvo had a rough showing down 37.2 per cent. It was Infiniti, however, that had one of the most schizophrenic showings: passenger car sales down 48 per cent, light truck sales up 113 per cent.

The jump was thanks mainly to the addition of the Infiniti JX, which managed 295 sales offsetting negative performances from the QX56 and the EX25. 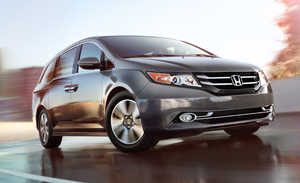 July 25, 2013 The Premier Publications Team Comments Off on New Honda Odyssey on sale this week