The Detroit 3 and its pickup offerings made the best of a 26-day sales month as truck sales helped make it one of the best Junes ever.

Top of the heap again was Ford with year-to-date sales increasing by 3.2 per cent to 146,700 total vehicles. Its monthly total wasn’t as encouraging though, as a June slide of six per cent.

GM Canada argued it too had a great pickup truck month, though it posted limited individual model sales totals. June was the month the “all-new from hood-to-hitch” 2014 Silverado and Sierra pick-ups debuted and sold along with the current generation.

The result? An increase of over 10 per cent for the month as compared to last-year month.

By contrast, Toyota Canada called its 956 Tacoma sales a record for June, bringing its total pickup sales for the first half of 2013 to 5,115. A very respectable total, but nowhere near numbers like Chrysler’s 7,176 for June or Ford’s 11,051. Meaning at least for now, when it comes to pickup sales Chrysler, Ford and GM are still the Big Three.

Subaru Canada called its 3,274 sold for June a 27.1 per cent increase over last-year month and the year-to-date totals of 17,258, another best-ever.

But, as is often the case in the retail race, not everything was coming up roses.

Mazda Canada admitted its June sales of 5,617 were a 24 per cent drop over last-year June. Total YTD sales stood at 35.941 or four per cent down from last year.

On the premium side, Cadillac sales for June were up 27 per cent, though GM supplied no June numbers.

Mercedes-Benz Canada called June a record-breaker for and its dealers with 3,493 vehicles delivered in June and 17,521 YTD.

Car sales totaled 1,912 or 9.3 per cent more than last-year month and the best June ever.

On the other hand, June brought BMW Canada sales of 3,298, a slight decrease of 1.5 per cent under last June. Similarly, the automaker’s YTD totals of 18,156 units were 1.5 per cent lower than last year’s.

June totals were not cause for celebration at Infiniti where sales of 693 units were down 8.3 per cent over last-year June. But YTD sales of 4,344 units represented an 8.5 per cent increase over last year’s YTD stats. 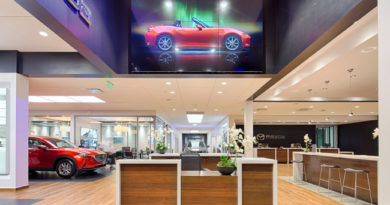 February 7, 2013 The Premier Publications Team Comments Off on Detroit pulls its weight but offshore brands pull January sales back

January 21, 2011 The Premier Publications Team Comments Off on Sonata Hybrid MSRP starts at $29,999