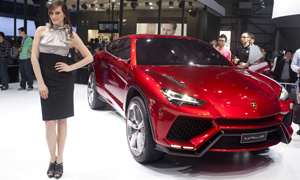 And you thought the enthusiast response to the Porsche Cayenne was rough.

Lamborghini confirmed what most have long believed with the news this week it would build a luxury SUV based on the Urus concept first shown at the Beijing Auto Show in 2012.

The Italian brand said it would produce the SUV in Sant’Agata Bolognese with a sales date pegged for sometime in 2018. As the third nameplate in the lineup, the SUV also marks a milestone for the automaker as it seeks additional volume in a growth segment.

The company noted the production demands would require investments of “hundreds of millions of Euros.”

The Sant’Agata Bolognese site will nearly double in size to 150,000 square meters. Plans include construction of a new production line, warehousing and enlargement of the R&D department.

The addition of a third model line will also provide important opportunities for the supplier network in Italy and internationally, and have a strong impact on human resources as Lamborghini intends to hire 500 new employees.

“The introduction of a third model line endorses the stable and sustainable growth of the company and signifies for us the beginning of a new era,” said Lamborghini chief Stephan Winkelmann.

“Distribution of volumes will be well balanced among the three major sales regions: EMEA, the Americas and Asia Pacific,” the company said in a release.

Target markets will be primarily the U.S.A., China, the Middle East, United Kingdom, Germany and Russia. Annual volumes will be around 3,000 vehicles and will double the company’s current sales performance.

January 5, 2015 The Premier Publications Team Comments Off on BMW compensates its Chinese dealers as sales slow