Reports from the U.S. this morning indicate Mitsubishi Motors Corp. plans to stop production of its current U.S.-made vehicles over the next three years and switch to producing global vehicles.

Models affected include the Eclipse and Endeavor crossover.

Reports indicate that Mitsubishi's factory in Normal, Ill., will begin producing up new models based on the platform underpinning the Outlander crossover, Outlander Sport (RVR in Canada) and Lancer sedan.

The company said it would announce what model will debut at the plant in February.  “Our sales in North America will increase,” Masuko said.

“We'll still be selling cars brought in from Japan, and we'll be adding the global small car as well.”

Masuko did not give a sales target for the United States. Mitsubishi expects combined sales to the Japanese, North American and European markets to grow by 90,000 units over the next three years.

Mitsubishi says that following the conversion of its production plant in Illinois, it plans to sell roughly half of its units in North America and export the rest overseas.

Stay tuned to Canadian AutoWorld for comments from Mitsubishi Motor Sales of Canada on this story.
- With Files from Automotive News 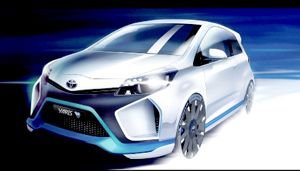 August 20, 2013 The Premier Publications Team Comments Off on Toyota pushing hybrids in Frankfurt

March 9, 2020 Tom Venetis Comments Off on Dilawri Group Of Companies Partners With Brian Ross In Ferrari Maserati Of Vancouver