The North American auto market is on pace to break the 18-million-unit mark for the first time since 2007, according to a new report by BMO Economics.

BMO economist Alex Koustas says that as we pass the halfway point of 2014, it is clear that the upside potential in the auto market is being fully realized, and then some.

“While a pick-up in American demand was fully expected, a continuation of last year’s record-setting selling pace in the Canadian market points to a deeper shift in consumer preferences,” he says. “The pace of sales in the overall North American market will keep both dealers and manufacturers very happy.”

Koustas notes that conditions in the North American marketplace look to be quite positive heading into the third quarter.

“Despite some disappointing headline indicators, American consumers are actually accelerating their purchases of new vehicles, and the recent strength in the U.S. labour market will only help things going forward. Canadians continue to purchase at a record-setting pace, despite restraint in overall consumer spending, indicating a preference for autos in relation to other big ticket items in leaner times.”

In Canada, sales have exceeded expectations and are on pace to match last year’s record high despite the gradual deleveraging being undertaken by Canadian consumers as a whole.

“While one cannot totally discount the fact that affordability has improved greatly on the back of lower prices and very enticing financing rates, the steady rise of cars per household points to a deeper underlying trend – one of shifting preferences,” he notes.

The increase in quality and convenience in vehicles is also a factor spurring this trend. If Canadian buying preferences continue to converge with those of their American neighbours – in terms of vehicles per household – sales activity can be expected to top the 1.7-million-unit mark for some time, even when factoring a hike in rates next year.

“In fact, a recent BMO survey found that Canadians intend to purchase a new vehicle every five years, spending an average of $26,044.” 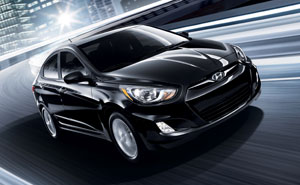 May 16, 2011 The Premier Publications Team Comments Off on Hyundai drops MSRP on Accent