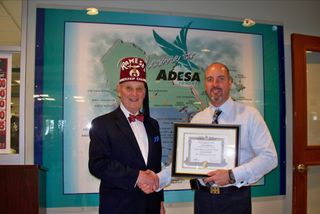 The Peel Shrine Club has acknowledged the support of ADESA Toronto and specifically its V-P and GM Darryl Maidment, making him a member of their One Hundred Million Dollar Club.

Maidment, who was given the certificate by Peel Shrine Club member Nobel Ivan Tees, has been a Shriner supporter for about five years and called the honour “just great.”

“They’ve (the Shriners) really helped out with our Christmas party by playing Santa and bringing the carts for the kids,” Maidment told AutoWorld. “So the partnership works out really well. They’re really a pleasure to deal with.”

In addition to having Shriner Christmas Cakes sold at auctions and providing space for the Shrine Truck and Trailer, Maidment and ADESA helped with fundraising efforts a few years ago when some Shriner parade go-carts were stolen.

The One Hundred Million Dollar Club was established in 1972 and provides financial support for the 21 Shine Hospitals throughout North America.

Sales up 15 per cent in January

February 2, 2012 The Premier Publications Team Comments Off on Sales up 15 per cent in January