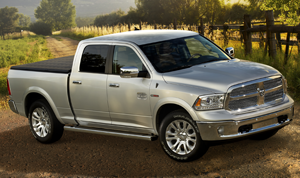 If you’re going to set goals, you might as well set them high.

While it is doubtful anyone at Chrysler would ever go on the record predicting its light duty beauty Ram 1500 will best the F-Series come next New Years Eve, there is no denying the automaker would love to take the volume title from the reigning champ.

And as storied and historic as the light duty pickup segment has been over the decades, Windsor’s best opportunity to secure the crown over Oakville and Oshawa could very well rest with the unit that hit dealerships in March.

Redesigned inside and out the year before, Ram 1500 is sporting loads of innovation and riding a wave of strong sales from 2013. New exterior lines and interior additions aside, market observers know the biggest factor driving Ram 1500 sales this year will be the addition of the 3.0-litre EcoDiesel engine.

As clichéd as the term is in automotive circles, the new powertrain really is a “game changer.”

“To put this diesel powertrain in a light duty truck that has 420 lb-ft torque, which is the same as a Ford EcoBoost, but get 40 miles per gallon, which is a full 30 per cent better than that same EcoBoost. To have the same capabilities with that type of improvement in fuel economy, it will be interesting to see how that plays out in the marketplace for this year,” Broadbear said.

The wildcard diesel generated a few headlines before it even hit the market in February when Automotive News reported U.S. dealers had ordered more than 8,000 EcoDiesels.

Bob Hegbloom, U.S. Ram brand director told the magazine that the percentage of initial diesel orders by dealers is double or triple what brand executives had anticipated, adding that in months to come, presold orders would be given priority to keep customer wait times in check.

Broadbear said Canadian dealer enthusiasm mirrored that of the U.S. with the Canadian office observing a similar, high-order rate.

And while he would not reveal specific dealer order numbers nor internal sales volume targets for the truck, Ram president Reid Bigland has gone on the record saying he expects diesel could account for up to 30 per cent of sales this year.

“We did a survey last year of light duty truck intenders, not just Ram buyers, and about 35 per cent said they would be interested in a diesel truck,” Broadbear added.

Why the Wait?
The new engine is another byproduct of the Fiat partnership. Italian subsidiary VM Motori S.p.A. builds the diesel engine. North American drivers will see it mated to a segment-exclusive eight-speed transmission.

Emissions are reduced by a urea system via a tank that requires refilling every 16,000 km.

When asked why it took Ram so long to offer a diesel engine in the segment, Broadbear speculated it was a case of if it ain’t broke, don’t fix it.

“We were all selling a lot of trucks without it. Diesels are more expensive and things were going well without it. But I think the time came about where we had this powertrain available in the Grand Cherokee,” he said, referring to how the same engine has been offered in the European-spec Jeep and in North American models as of the 2013 model year.

“It’s been around for a number of years with many on the road so it is a proven engine. For us, it was a perfect opportunity to take an engine that was in our portfolio and slide it over into the Ram pickup,” he said.

Leasing, Incentives and Conquesting
There is no doubt that a lack of a viable leasing option for Chrysler in Canada hurts sales for the automaker. That aside, the company has countered that deficiency with some extended rates to keep payments more lease-like.

Dabbling with the build and price tool on the Ram Canada website in mid-March, this writer could secure finance rates stretching from 48 months to 96 months at 4.29 per cent. Payment frequency ran the gamut from monthly to bi-weekly.

Broadbear would not disclose plans for incentives going into the spring sales blitz, but he did note that as most buyers are payment conscious, the extender terms are “just as good as any lease.”

“Not having a leasing product didn’t seem to impact us dramatically in 2013,” he added.

There is no doubt the key to volume title rest in conquesting customers from Ford and GM. Customers in this segment are a loyal lot with most disposing of a truck and replacing it with the same brand. He said Ram was tops in customer loyalty in 2013 and the best at catching the customers who do stray.

“For a few years, we have been enjoying the highest conquest rate in full-size trucks amongst all manufacturers. Where you’re keeping your customers and pulling more from the competition than they’re pulling from you, it’s the best of both worlds. And that’s been one of the reasons our market share has grown.”

His last available data (from mid-2013) showed the conquest rate for the Big Three pickups sat at 47 per cent for Ram, 42 per cent for Ford and 28 per cent for GM.

Either way it shakes out, the race should be tighter in the segment in 2014 with Ford offering the new, aluminum-body F-150 this fall. Blue Oval executives have said it is lighter, faster and stronger than the outgoing version. Only time will tell if it Ram can take advantage over the first half of the year.

“We’ve been able to build a lot of best-in-class elements into our light duty and heavy duty pickup trucks which have enabled us to conquest these competitive truck owners and enabled us to keep more of our current owners,” he said.

“Then the recognition we’ve gotten from MotorTrend or the Canadian Truck King Challenge, Wards Automotive and more; it has all flowed from those product innovations as well. It’s a lot of things that have come together to get us to where we are right now.”
a

May 10, 2013 The Premier Publications Team Comments Off on Average vehicle transaction prices drop in 2012