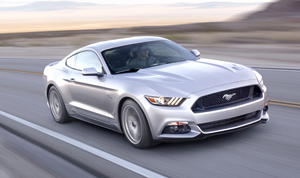 The latest edition of the Mustang debuted Dec. 5.

But this Mustang, called “the heart and soul of Ford,” is going global with a simultaneous reveal in six cities on four different continents.   The automaker says the car’s impact goes well beyond the 9 million-plus cars sold during its 50 years of continuous production.

Ford calls the Mustang the “world’s most-liked vehicle on Facebook,” with thousands of appearances in film, television, music and video games.

Banking on that, the Mustang will be on sale in key parts of Europe and Asia.   “We crafted this car with the goal of creating a contemporary interpretation of Mustang – an American automotive icon that symbolizes optimism and freedom for millions of people around the world,” said Jim Farley, executive vice president of Ford global marketing, sales and service and Lincoln.    The automaker says several key design features define the all-new Mustang, including a lower, wider stance with a reduction in roof height, wider rear fenders and track width.

The fastback will return but with a “sleeker profile enabled by more steeply sloped windshield and rear glass.”  The front fascia and grille get a contemporary execution.  The automaker calls the interior “aviation-inspired” with the “highest degree of craftsmanship ever found in a Mustang.”

That means large, clear, easy-to-read instrumentation, a roomier and tactile switches and knobs for better control.

There’s a trunk big enough to hold two golf bags.   Under the hood, the Mustang shopper has plenty of choices.

“A V6 and V8 are joined this year by an all-new 2.3-litre EcoBoost engine that brings state-of-the-art technology to Mustang.”

“This EcoBoost engine delivers where a Mustang driver expects it to with a broad, flat torque curve that pours out when you stand on it for easy passing or hustling down a twisty road,” said Dave Pericak, Mustang chief engineer.

April 17, 2014, marks the 50th anniversary of the introduction of the original Ford Mustang and each 2015 model marks the milestone with a badge on the instrument panel that includes the galloping pony logo and the words “Mustang – Since 1964.”

Dealership tips if the price of oil goes down

September 24, 2010 The Premier Publications Team Comments Off on Dealership tips if the price of oil goes down