Toyota Motor Corporation sold its 5,000,000th hybrid vehicle worldwide noting that Canada has accounted for over 77,000 sold to date.

Toyota Canada’s performance accounts for more than 80 per cent of Canada’s hybrid sales in 2012, the automaker said.

TMC estimates that its hybrid vehicles throughout the world have collectively reduced CO2 emissions by approximately 34 million tons of CO2 emissions, compared to what would have been put into the atmosphere if gasoline-powered vehicles had been driven instead of hybrids.

In addition, it’s estimated that Toyota hybrids have saved about 17 million kilolitres of gasoline globally, compared to what would have been consumed by gasoline-only powered vehicles.

In Canada, Toyota and Lexus hybrids – have reduced CO2 emissions by about 380 thousand tons and saved an estimated 163 million litres of gasoline.   “Toyota’s hybrid offerings have been extremely beneficial in reducing the environmental impact of cars in our society,” said Seiji Ichii, president and CEO, Toyota Canada.

“The best part is that we are only at the early stages of this trend. As hybrids become even more entrenched and continue to improve, the positive effects on the environment will become even greater.”

Toyota and Lexus sell 19 hybrid models and one plug-in hybrid in 80 countries and regions around the world. Eleven of the models are available in the Canada, including six from Toyota and five from Lexus. These include Prius Liftback, Prius v, Prius c, Prius Plug-in, Camry Hybrid, Highlander Hybrid, Lexus CT200h, ES300h, GS450h, LS600h and RX450h.

Beginning next year the RX450h will be manufactured by Toyota Motor Manufacturing Canada in Cambridge, Ontario. 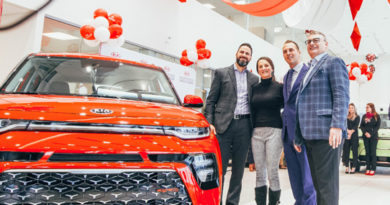 May 17, 2012 The Premier Publications Team Comments Off on Lexus announces pricing for refreshed RX lineup