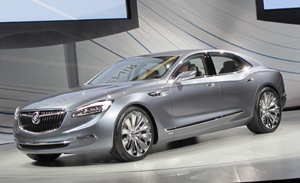 The Buick Avenir concept is the harbinger of a new flagship sedan with personal seating for four.

Power comes from a next generation, direct injection V6 with cylinder deactivation and start/stop technology. It features a twin clutch, nine-speed transmission and all-wheel-drive.

Avenir, which is French for future, blends new styling cues along with signature ones like the boat tail rear and sweep-spear bodyside character line.

The most notable exterior change is a new grille that actually harkens back to the 1954 Buick Wildcat II concept with a return to the red, silver and blue three-shield badge.

The interior was inspired by sea waves receding from a beach with a flow motif throughout the cabin.

Technology advances abound in the Avenir. At startup, the instrument cluster and infotainment screen are instantly configured with screen displays based on prior customization while also it also recognizes the user’s music preferences, calendar schedule and recently visited locations from a cellphone’s GPS. It can even pick up a podcast the user was listening to at the moment it was interrupted.

Going into production in early 2016 in the U.S., the 2016 Cascada is the first Buick convertible in 25 years featuring seating for four.

It will be powered by a direct injection, 1.6-litre turbo four-cylinder with 200 hp and 206 lb/ft of torque. There is an overboost feature that pushes torque briefly up to 221 lb/ft.

Rollover protection is provided by bars behind the rear seats that deploy when the chance of a rollover is detected.

January 24, 2011 The Premier Publications Team Comments Off on Mazda to produce electric Mazda2