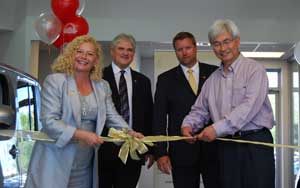 TORONTO, ONT. -- Agincourt Nissan has been officially WomenCertified, joining a growing list of dealerships signing on to one of the hottest training programs on the Canadian market.

The distinction came yesterday during a brief ceremony at the Nissan shop in the northwest end of Toronto that included representatives from WomenCertified, Coast to Coast Dealer Services, Toronto city council, and even a pop in from Nissan Canada president, Allen Childs and Infiniti director of dealer operations, Wendy Durward.

WomenCertified is a training program that teaches dealership staff the nuances of interacting and selling to women customers. After the Canadian rollout last fall, Sherry English of WomenCertified says the program is catching on like “wildfire” and named a number of high-profile dealer groups that are in the midst of being WomenCertified.

Stephen said he first heard of the program from his general sales manager, Lyle Jakobsen. Jakobsen joined the Agincourt Nissan team from Ottawa where the WomenCertified program has enjoyed some success.

“Nobody in the GTA has done it. I am very customer-service driven and it matched what we were trying to do but was different enough to stand out,” he said.

With his entire team now wearing the WomenCertified pin and similar branding on the doors and walls of the showroom, Stephen said there has been a “noticeable difference” with the staff and that some of the small changes have lead to big improvements.

“The training focuses on the finer details. Something as simple as having hand lotion and potpourri in the women’s washroom might not seem like much to you or I, but women talk about and notice things like a clean bathroom.”

Dealerships staff said they have already heard comments from customers about the change and are hoping these small details will pay dividends with sales.

According to Sharlene Dobson, WomenCertified representative, the training and certification program promotes skills and tools to help boost sales a customer loyalty among all consumers, not just women.

“Over 85 per cent of all auto sales are influenced by women and more than 80 per cent of women are responsible for the maintenance of their own vehicle,” she said. “The way women shop is different than men. That is where this program comes in.”

Stephen said the intent is to bring the program to the family’s Markham Infiniti dealership soon.

“This is something I am recommending to dealers, for sure.”

November 26, 2009 The Premier Publications Team Comments Off on Website tips

November 24, 2010 The Premier Publications Team Comments Off on Canada wants the Fiat: Chrysler