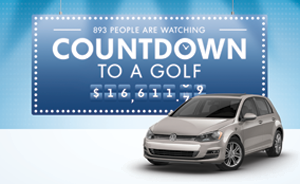 Thomas Tetzlaff, VW Canada’s manager of media relations, calls the “Countdown to a Golf,” promotion an “auction in reverse.”

“We are the people’s car. So what could be more appropriate than to let the people bid on the car,” Tetzlaff said. “At least, they’re bidding on a discount. We know that people love the excitement and the thrill of a deal, especially on something new.”

And so the “backwards auction” was born.

He goes on to point out the error in the name. The automaker is counting down to the arrival of the GTI as well as the Golf. The former makes its debut in June; the latter in July.

“We start with zero and the time start ticking at a little over 1.13 cents a second.”

Potentially, the discount could be somewhere in the neighborhood of $1,000 for each day the promotion runs. That could mean as much as a $18,995 discount for the Golf and $27,995 for the GTI. But he admits that’s a remote possibility because no one would wait that long.

“Someone is going to get itch and take the discount they see.”

In mid-May, he said the average discount contestants had locked in was about $400.

Once a bidder locks in a discount, the clock goes back to zero and they are off and running again.

He said attendance so far has been excellent - anywhere from 100 to a few thousand at a time. A clock on the page shows the number of people on the site at a given time.

Tetzlaff says promotion costs have been minimal. The automaker did some low-cost social media marketing, relying on its FaceBook fans, some press releases and word of mouth, nothing else.

That fan count, he said, is the work of years of work.

“Marketing is tricky. You put out an ad in and you are never 100 per cent sure who will watch it our listen to it,” he said. “But with this, we are confident our fans are aware and telling friends to go to the site.”

But the automaker is not taking the minimalist route as debut days creep up.

“You won’t be able to take a step without hearing something about the Golf and GTI,” he assures.

Being turned off by network security (it’s a good thing)

October 21, 2016 Jackson Hayes Comments Off on Being turned off by network security (it’s a good thing)

Aspen: ‘Today, brands must engage consumers at every opportunity’

March 14, 2013 The Premier Publications Team Comments Off on Aspen: ‘Today, brands must engage consumers at every opportunity’ 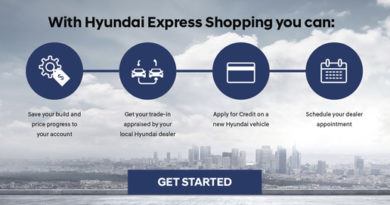