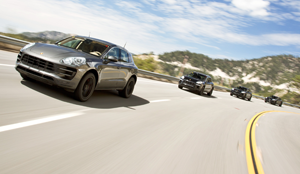 OAKVILLE, ONT. – The driver popped out of the dark-coloured Macan Turbo and immediately announced his intentions.

The driver, one of a handful of potential customers invited to drive the new Porsche Macan at Oakville Porsche in late May, was one of more than 1,000 participants in the Macan Grand Tour. The OEM-organized, dealer-administered series of test-drives hit all but one dealership in Porsche’s sales network in May and June.

The goal, explained Porsche marketing director Laurance Yap, was to give potential buyers that “ah-ha moment” behind the wheel of the brand’s latest nameplate.

The Macan tour marks the fourth time the OEM has offered its dealers a turnkey drive event. The concept started with a full-line event in 2010. Subsequent installments include the Boxster in 2012 and Cayman last year.

“We really feel the best way to convince people to buy the car is to let them drive it. The cars are wonderful to look at and awesome to sit in, but it is difficult to explain why they cost so much until you drive one,” he explained.

“While test drives are crucial to the retail strategy and dealers do have demo fleets, but a long time ago we decided the test drive programs were important enough that we were willing to put our own cars into the mix and provide enough so that a lot of people could test drive cars.”

The OEM provides the vehicles, driving instructors, presentation material, guidance on drive route and handles the logistics. It is up to the dealer to put the bums in the seats and provide any catering.

Prices were not revealed, though Yap said it was a flat rate per day for dealers. And unlike in years previous where it was one crew crossing the country, the volume aspirations of Macan dictated a larger presence. There were two separate teams hitting dealerships simultaneously across the country.

Oakville Porsche’s one-day event saw four waves of up to 16 people per wave wind their way through a mix of highway and back roads on a two-hour road test lead by Porsche driving instructor Pierre Des Marais.

Des Marais used walky-talkies set up in each vehicle to communicate with the drivers and explain the vehicle’s systems while traversing the drive route.

Participants drove both the Macan S and the Macan Turbo.

Oakville Porsche dealer Francesco Policaro said he loved the idea of drive events like this because they offer the perfect way to showcase how the product handles. He tempted attendees who purchased a Macan that day at his stop with an additional $1,000 to spend in the business office.

When asked about the sales penetration rate stemming from events like this, Yap said he couldn’t reveal specific numbers.

“I will say that of all of the things that we do, the conversion rate with drive events is by far the highest. Once they’ve driven the car, its kind of only a matter of time.”

In terms of overall sales projections, some analysts have predicted Macan could cannibalize Cayenne volume globally. While Porsche executives admitted there might be some erosion – between five and 10 per cent – he said Macan is more about the stage of life for buyers than price.

“Macan S is $54,300 and close to where the base Cayenne is. But the buyer of a V6 or diesel Cayenne is very different than a buyer of Macan S.”

He would also not reveal how many units from the initial 50,000-unit production run out of Leipzig would be earmarked for Canada, though there are some unconfirmed reports from dealers that 1,700 will be available in Canada in the first year.

“Every dealer gets a launch car for demonstrators and showroom models,” Yap said, adding that the pipeline as of late May was “heavily presold.”

In the experience age, video is king

January 17, 2018 Jackson Hayes Comments Off on In the experience age, video is king