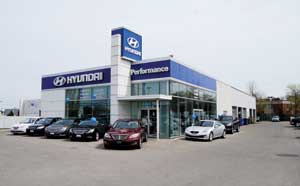 ST. CATHARINES, ONT. – Rein Knol runs a small Hyundai dealership that may have the worst new-car store location in Ontario.

Performance Hyundai’s modest three-car showroom sits behind another dealership and is flanked by two more. There is no sign on the street and really no cohesive inventory lot of which to speak. Nor is there a storied history with the town – just seven years.

Despite the evidence to the contrary, the small shop is defying the sales odds. It finished the year as one of Hyundai’s best performing dealers and beat its OEM’s provincial market share. Performance also won a President’s Merit Award and ranks near the top in CSI ratings.

So how does he do it? Knol will tell you it is a combination of many factors. A solid sales team, positive staff and offering reliable products at competitive prices helped for sure.

But, he says, 31 per cent of everything the dealership sold last year was through a new referral program called Friends and Family Rewards.

“We had to get creative to get traffic in here. Newspaper and radio just don’t cut it anymore. You can’t just throw a big ad in a paper and have success,” he says. “We wanted to get back to basics like word of mouth.”

Performance Hyundai has been using the Friends and Family Rewards program for about a year and a half. Based on a concept from the U.S. called the Birddog Club, the new version underwent software and system upgrades before being slapped with a generic and more explanatory name.

The web-based Friends and Family Rewards program was launched quietly in 2008 and news is starting to spread.

“Every dealership says, ‘We already have a referral program.’ The key to this one is that it is manageable and measurable,” says Jim O’Brien of Friends and Family Rewards.

“Think about it. You’ve just sold a car; the customer has been through the sales wringer, sat through F&I and then you ask them for one more thing?”

He says the Friends and Family Rewards program is different; it is giving to get.

It works on the basic principal of offering financial rewards to motivate customers into sending prospects to your dealership.

O’Brien says the program is adaptable, flexible and works in conjunction with good customer service. It can range from awarding points good for service or merchandise to doling out pre-loaded Mastercards, similar to what Performance does.

But what if a referral customer doesn’t want a Hyundai?

Knol’s shop is part of the Performance Auto Group that operates a number of stores across a variety of manufacturers. Leads are shared so if a Toyota customer refers a friend who wants a BMW, the sales team at the BMW shop is notified.

While hardly a new concept, he says what sets it apart from the litany of in-house and customizable referral programs is its ease of execution and measurability.

“While most dealers will tell you they have a similar program, few really achieve the huge amount of business that is available from their existing customer base,” he says.

The programming steps make it “simple” for the dealers and sales associates. It features step-by-step prompts on the computer for sales associates to follow when asking the customer for the referral. Information is collected and added to data lists for blast emails on sales specials and the like.

Knol says he runs a “graduated program” that offers $100 to start and ups it for every additional referral through the calendar year.

He paid some people upwards of $6,000 last year alone. All told, the program cost his store roughly $30,000 in 2009 and he was able to reduce his advertising budget somewhat accordingly.

But the question remains, how do you know you are not cannibalizing sales from regular advertising? Are you counting referral successes as sales you would have had anyway?

While it is impossible to say for certain, Knol says the numbers don’t lie.

“This year, we are 29 per cent to date over last year and Hyundai in all of Ontario is at 9 per cent,” he says. “Over 30 per cent of our sales come from the program and we have a system that at least tracks the success.”

“We seem to be ahead of the curve. While the Niagara region and Hamilton are flat or down from last year at other Hyundai stores, we’re up. What’s the difference? It’s not where our lot is. It’s not the sign on the road and it’s not that we’ve been here for 25 years,” he explains. “What we thought would work, is working.”
For more information on the Friends and Family Rewards program, check out www.friendsandfamilyrewards.com 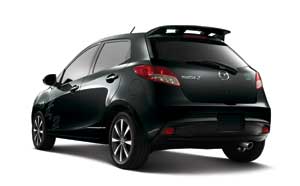 October 15, 2010 The Premier Publications Team Comments Off on JWT to run 'Team Mazda'

February 27, 2013 The Premier Publications Team Comments Off on Creating online showrooms for the Internet age

November 18, 2010 The Premier Publications Team Comments Off on New global website for Mitsubishi