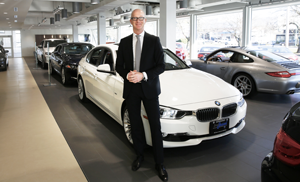 VANCOUVER, B.C. – Sitting amongst a growing row of German luxury automotive brands on Boundary Road in B.C.’s lower mainland is a type of store you won’t find anywhere else in Canada.

In and amongst the OpenRoad group’s latest Audi store and the massive Mercedes-Benz Boundary is the equally impressive expansion from Brian Jessel BMW. The main difference between the latter and all the other sparkling rooftops is the kind of inventory sitting on the two-acre lot.

The brainchild of the executive team, Brian Jessel BMW Pre-Owned officially opened for sales and service in early January. It sits just five blocks from the flagship Brian Jessel BMW store and could very well provide the model for luxury brands and progressive dealers.

“I think when your are selling new and pre-owned cars under one roof, its kind of like a having an all-season tire; it’s really the master of nothing. It will do a good job, but if you want to really grow your business, you have to be focused,” explains Jim Murray, managing director at Brian Jessel BMW.

“Like a summer tire and a winter tire are both best for their respective seasons, having a pre-owned store that just does pre-owned and a new department that just does new, I think we’ll see a lot more focus with the management teams and the people working below them. It will be a formula that will work for us.”

Concept and Execution
The idea first germinated when BMW was accepting proposals from its retail network for the i sub brand.

The main Jessel store, being the highest volume new car dealership for the brand in Canada, was awarded the rights to sell the electric lineup that includes i3 and i8. That honour carried a million-dollar renovation and corporate image upgrades. And as Murray said, when you are spending millions on those types of elements, you have to find ways to pay for those investments.

The team looked south of the border for inspiration from some U.S. pre-owned dealers. Their idea then snowballed into creating a standalone used operation. As Murray says, unlike franchise stores, a used-car operation would let them create their own market and one not limited by inventory allocation or brand market share.

The group already owned the land and bones of a previous General Motors dealership on Boundary Road. They had even been running it as a used-car superstore.

Months of renovations on the front end wrapped in late December as the Brian Jessel BMW Pre-Owned was built with the exact look and feel of Brian Jessel BMW. Even though it exclusively retails used cars, the store meets the same CI standards as the new retail point. It boasts a 9,000 square foot showroom, stylish customer lounge, a heated service drive-thru and reception along with an 18-bay back shop.

Though it is not technically the first standalone BMW used point as some locations have separate buildings on the same property. And nor is it the first luxury line to have a standalone used store as Pfaff Automotive Partners did the very same thing with Porsche north of Toronto a few years ago, the B.C. effort is the first pre-owned operation in a completely separate location combined with a full service and parts department.

“It’s a true standalone dealership with its own dealer code, website, employees and financial statement reporting to the manufacturer. It’s not an extension of the store.”

Talking Numbers
Costs for the recent flagship store renovations and the overhaul at the used-car spot topped out at roughly $18 million.

Murray says the Pre-Owned will carry around 200 units at all times with high expectations for several turns a year. He suggests the store will retail 300 to 500 off-make units and roughly 900 to 1,000 pre-owned BMWs during its first full year.

That tally is expected to jump to over 2,000 units annually within three to five years.

His team knows that volume on the used side should not be much of an issue going forward. BMW Canada maintained a strong lease portfolio through the economic downturn and has enjoyed a solid performance in recent years finishing with 37,723 and 37,707 units sold in 2013 and 2012 respectively (including MINI, a brand Brian Jessel BMW does not sell).

“You just have to look at the numbers that are coming off the road to recognize there is a great opportunity here,” Murray says. “But you have to be prepared for that volume to have the people, processes and facilities to do it.”

He notes that current BMW Canada president Hans Blesse recognizes the “tremendous opportunity” with the BMW lease and finance portfolio and that the network really needs to handle those maturing leases and finances through trade-ins and lease returns.

When asked about cannibalizing current service work at the flagship store, Murray says they are looking at it in terms of total capacity and not competition.

There will some be internal shifting of where we direct the business, he adds, saying the plan is for a centralized BDC for service to direct customers to either store depending on where the repair can be made fastest.

Murray says the concept was to ensure the pre-owned store offered to the same “wow factor” as the new car franchise.

The type of customer walking into the stores may differ, he says, but we still wanted to give them the same look and feel.

“What separates the luxury car dealer from a regular car dealer is the experience. We’re still selling cars; we’re just dressed up a little nicer.”

Looking to the Future
Murray says he has a lot of excitement heading into 2015.

The new point offers the chance to explore new processes while still meeting the core values of their business philosophy.

Employees will still have the same training mandates from BMW and internally and there will be at least one BMW product genius roaming the Pre-Owned showroom when the doors open.

Of course, it is a bit of a double-edged sword as the expansion moves from the traditional model of four departments – new sales, used sales, fixed ops and F&I – sharing expenses down to three departments splitting costs.

In the end, Murray and his team feel they have made the best decision.

“This move has been about positioning us for growth in the years ahead. You can only go one way in business and if you’re not growing, your competition is and you are getting smaller.

June 6, 2011 The Premier Publications Team Comments Off on Quebec dealers to benefit from Manheim, LAR partnership