MILTON – Terry O’Sullivan was working at his family’s body shop in Hamilton, Ont., when the idea came to him.

He said he noticed shops would tend to delay small and inexpensive repairs in favour of working on the pricier and more time-consuming fixes.

“The jobs were only $200 but the gross was close to 60 percent. I thought if I could figure out a way to line those up, I’d be doing okay,” he said.

O’Sullivan did figure out a way to “line those up” nearly a decade ago and he has been enjoying trying to perfect his system ever since.

Called Touch Up in a Flash, his company operates out of a sprawling 16,000 square-foot facility in the north end of Milton, Ont. O’Sullivan and his team set up shop there a few years ago, but the operation itself has been around for about eight years and has fixed about 100,000 vehicles. This shop specializes in small interior and exterior repairs, mostly for dealerships, auctions and fleet services.

He says they don’t have a welder on staff and they won’t even look at the frame or any mechanical issues. They do limited part replacement too, so the overhead for tools and specialized equipment remains fairly low. The costs are all in labour and they rarely have an employee waiting around for a part. It is built for speed, service and price.

The ingenious method is based on the factory assembly line principle: One person does one job as the product moves from start to finish. At Touch Up, the body guys work on the body; the cleaners clean; the painters paint; and the drivers drive.

There is no repetition or wasted time inside these walls; O’Sullivan’s lofty production goal wouldn’t last if there were.

He says the trick is to eliminate the need for questions.

“There is very little verbal communication,” operations manager Ryan Schwartz explains. “I don’t want to have to ask what needs to be done with this car or that car. I want to know exactly what I have to do without finding someone to clarify things.”

That is where what he has dubbed the “hat system” simplifies operations.

Once a vehicle has been assessed and inspected, a coloured magnetic cone is placed on the roof. Each colour represents a different stage in the line and informs everyone where it is in production and where it needs to go next.

After repairs are complete in the first stage, vehicles are taken to the large paint booth near the back of the shop. There are five paint bays each with double the air velocity to prevent overspray from settling on other cars coming in and going out. The increased speed eliminates any overspray problems and allows five separate painters to work at a time.
Unlike many body shops, Touch Up has a dedicated paint mixer who ensures the painters have the exact paint when they are ready to start. When the painter picks up the gun, everything is done for him, Schwartz says. Matching is no problem either as their system can match any manufacture colour perfectly.

Infrared lights await the freshly painted vehicles outside the booth. The “drying light employee” turns on the lights and writes the time on the window. The paint kicks over in an hour and a new hat is added to the roof as the vehicle moves to the large lot in the rear.

Vehicles are then cleaned and moved to the polishing centre set up in a separate enclosed area outside the shop to avoid contact with excess dust and debris from the sanding inside.

The last stage before delivery is a three-tiered inspection process. He says it starts with a final inspection before a “final inspection supervisor” looks over the repairs. A quality control inspector then gives it a final once-over and signs off on the job.

Although it seems repetitive, both Schwartz and O’Sullivan feel it’s the best way to ensure the highest quality.

“One person would usually see it all but could occasionally miss something. A second person would generally catch it all, so by the time the third person sees it, we are very confident in our work,” Schwartz says.

Delivery and pick-up are handled by a group of 30 retirees including some former police officers and teachers who run vehicles back and forth.

Though much of the 45-member staff is cross-trained and can do multiple jobs, the production line system ensures everyone focuses on one thing instead of being bogged down with a series of jobs.

O’Sullivan says the exact model is not in use anywhere else for good reason: “It is very hard to make this work. It’s taken me eight years to figure out how to do it and we’re still perfecting it.”

The facility is designed and built for high volume and speed. It was mapped out for flow so every car can be moved around at any time without having to re-position another vehicle.

And O’Sullivan is old school too. He prefers working without a contract because he thinks that sort of protection breeds complacency and will adversely affect efficiency.
Without a guarantee, he says, you are forced to be at your best all the time.

Most of the work comes from dealers, manufactures and rental cars. His current customer network stretches to west to Cambridge, east to Toronto and south to Burlington, though they have had clients in Ottawa and Barrie.

Now that operations are really rolling, the Touch Up team is working on developing a larger customer base and working to really convince people they can do what they claim. Given their tagline of getting a car “front-line ready” in three days at 100 vehicles per day, some disbelief from potential customers is understandable.

For more information contact Touch Up in a Flash at 905-875-3248 or www.touchupinaflash.ca. 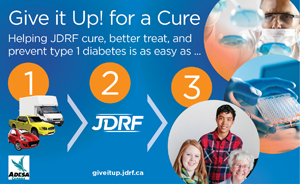 ADESA helps donors to ‘give it up’

July 9, 2013 The Premier Publications Team Comments Off on ADESA helps donors to ‘give it up’