The number of U.S. buyers in Canadian auction lanes flexing the might of the greenback will likely begin to weaken in the months to come, as increased volume on American soil means wholesalers needn’t cast a gaze north of the border.

The inventory influx, coupled with a strengthening, albeit very slowly, loonie and increased issues getting vehicles from Canada into the U.S., says ADESA chief economist Tom Kontos, will mean more cars staying put.

Kontos, who addressed the crowd at the IARA summer roundtable last month with a detailed market snapshot of new and used-vehicle sales figures and inventory predictions, also said that the used-vehicle price party wholesalers and consignors have enjoyed in recent years is likely to start winding down shortly.

“Now in 2015 and 2016 with more off-lease supply and other forms of supply coming back means we should brace ourselves for some years of price softening, though it will be at manageable levels as the new car sales didn’t go through the roof as soon as the recession ended.”

Used-vehicle inventory levels in Canada lag a little behind the U.S. (proportionally) given two important factors – the slower return to leasing in Canada following the Great Recession and the quick and continued adoption of 72, 84 and 96-month loan terms on the new vehicle side.

Kontos said the market would see more off-lease volume in Canada starting in late 2017, which will put downward pressure on prices. Inventory on both sides of the border has also seen some “artificial supply restraint” because of the Takata airbag recall and Volkswagen’s diesel emissions cheating scandal.

Canadian Peak
While he expected America’s new car tally this year to hold near the 17.47-million unit record hit last year, Kontos pointed to ALG numbers that predicted Canada still has one more milestone year in the tank.

Kontos said this plateauing in new cars – a statement echoed by AutoNation’s Mike Jackson throughout this year – is fine for business as long as dealers are working on profitability.

“You can still grow your profitability without necessarily growing your volume,” he said.

North America’s “bifurcated market,” as he puts it, will continue to see trucks and SUVs driving new and used-vehicle numbers as car segments decline.

Wholesale prices year-to-date through June show full-size SUVs and full-size pickups both up 10 per cent with compact pickups and midsize SUVs up 9.2 per cent and 7.4 per cent respectively.

At the same time, full-size cars, compact cars and luxury cars are down 6.3 per cent, 5.5 per cent and 4.2 per cent respectively. 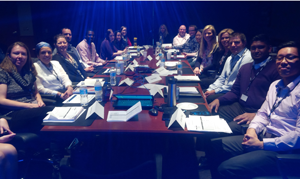