“We recognize this alignment as an opportunity to solidify our relationships with our dealers,” CarProof president Paul Antony said in a release, adding that the partnership will facilitate a smooth process for assimilating CarProof information and tools into dealership websites and inventory listings.

DMT is a web and software developer for the automotive industry providing custom application solutions for the web. The company works primarily with manufacturers and provides OEM-branded websites for franchise dealers under each brand.

Headquartered on the University of Manitoba campus, DMT says it currently has roughly 250 Canadian dealer websites including all Volvo, Mitsubishi and VW stores across Canada.

Scott McCrea of DMT said CarProof members were the ones asking for this integration.

“Dealers already providing CarProof reports to consumers on their used car inventory wish to be able to take advantage of the online marketing tools and functionality available to them through CarProof,” he said.

Shortly before this latest development, CarProof announced the team had grown with the addition of three new faces to Quebec and eastern Canada teams.

Efthimiopoulos will be handling the Atlantic provinces and is based in Halifax. Bernard and Gallant will head up Quebec and are based in Quebec City and Montreal respectively. 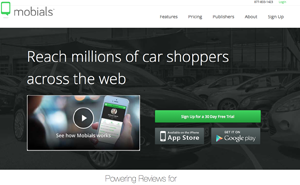 Mobials set to go live with Trader in February

February 6, 2015 The Premier Publications Team Comments Off on Mobials set to go live with Trader in February

December 7, 2010 The Premier Publications Team Comments Off on Remarketing shows set dates for 2011