It’s been a good year for OPENLANE. Despite tough times, or because of them, the online auction company says it’s having a banner year with more than 200,000 units moved in North America in the first six months of 2009.

“We’re celebrating. Despite the economic turmoil, we’ve been able to grow with significant numbers,” OPENLANE CEO Daniel Farrar told Canadian AutoWorld. “Our June sales of 37,500 units are a record for any month.”

He explains the auction company success in a recessionary economy: “There’s a greater demand for used vehicles. Though there are fewer trade-ins… and fewer rental returns, a lot of dealers are looking for a quality supply of used and online auctions are growing steadily.”

He adds he is not concerned that the large numbers of Chrysler and GM dealers closing their doors will hobble growth.

“As dealership numbers decrease, those that remain are much more sophisticated with their online demands. Online auctions are expected to grow in the future by 14 percent, while traditional auction growth will be flat or decrease.”

As for the future, don’t expect any major changes in operations unless dealers and consignors demand them. Farrar says that most changes come as the result of consultation with both groups.

OPENLANE will be celebrating its birthday month of August by giving buying and selling dealers a gift.

“Any dealer buying or selling 10 units in the month of August gets a free buy or sell fee,” said OPENLANE marketing director Ed Chuang. That’s the power of 10.” 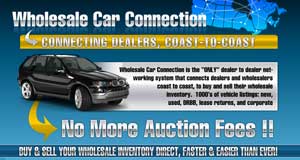 April 15, 2010 The Premier Publications Team Comments Off on Auction alternative

Physical auctions are here to stay

July 8, 2016 Jackson Hayes Comments Off on Physical auctions are here to stay