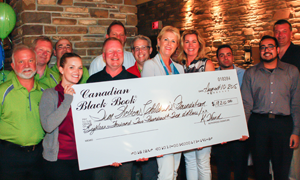 MISSISSAUGA, ONT. – It has often been said, and usually by a dampened weekend warrior soldiering through a soggy back nine, that golf is a game played outdoors and privy to Mother Nature’s whims.

Such was the case on August 10 at the 18th annual Canadian Black Book charity golf tournament.

Held at the venerable Mississauga Golf and Country Club west of Toronto, the sold out event was unfortunately cut short by inclement weather. Though the 144 players were only able to get in roughly 12 holes, the charitable spirit was far from doused as players raised $18,210 for the Tim Horton Children’s Foundation.

“Even though we were rained out for the first time in 18 years, everyone enjoyed their day,” explains CBB’s Josh Bailey.

“One golfer mentioned to me it was a great course to play, even in the rain. Not to mention, everyone can leave knowing they were part of raising over $18,000 to help the Tim Horton Children's Foundation, even if we left a bit chilled from the weather that is heartwarming,” he adds.

The running total raised and donated from this event now tops $325,000. 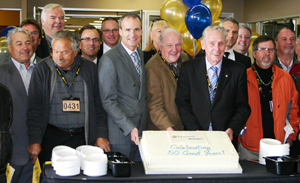