RED DEER, ALTA. – It is safe to say Reverse Dealer started with the most humble of beginnings.

To get the word out about his then unproven used-car retail concept, founder and president, Chris Schellenberger set up a pup tent outside a car wash offering to pay for people’s car washes if they listened to his pitch.

The effort paid off. Two years on and Reverse Dealer has moved from one guy braving Alberta’s harsh winter chill to a five-acre lot, two salespeople, a social media manager, a consignment manager and an inventory base that grows larger by the day.

“Our mission is to get consumer retail price for the used car, not wholesale,” Schellenberger said. “We’re a dealership for the public.”

Reverse Dealer is a unique approach to consignment that might not have an equal in today’s market.

The dealership takes used vehicles from consumers not interested in selling privately on Kijiji or turned off by wholesale prices offered by a traditional dealership.

They drop off the car to Reverse Dealer, pay $50 a month to store the vehicle and get it listed online, and let Schellenberger and his team sell it for retail price. The store takes a flat rate of $1,000 per sale and, since it doesn’t own the car, there is no overhead like floorplanning or insurance.

It is consignment, with a twist.

Schellenberger said the idea for Reverse Dealer was developed over time as he worked as the director of used car operations for the Scottsville Group in Red Deer.

The market is double the size on the private side. That’s what we are going after. All these people want is a fair price.

He had earned that position with the then four-store group (it has subsequently sold its Kia franchise) after generating major profit at one of the locations inside of nine months.

“They asked me what I was doing. Instead of answering, I put a package together to show what I could do for all the stores in a new role that would manage the used-car departments.”

Despite the success that followed, he said he had lingering issues with the tried-and-true trade-in process. He hated giving a salesman a trade number because it was always nowhere near what the customer wanted for the vehicle.

“I tried to figure out a way around it and to get money back to the seller,” he said, a concept that eventually led to Reverse Dealer.

He ditched his “gravy” job with the group in 2014 and started pounding the pavement that fall.

Based on the sheer volume of private sellers on Kijiji, he bet he could find people who weren’t happy with selling privately. And he did.

The initial plan was to operate solely online and forgo the overhead associated with physical inventory. Unfortunately, customers started asking him to take vehicles because they didn’t want them either.

Once his driveway was full he rented 10 spots at a parking lot in town. That grew to half the lot then eventually the whole thing.

Now the operation has a physical location in the north end of the city with an office and five acres of space. There were 75 units on the ground in mid-July with more coming in every day (and that’s 75 units being charged $50 per month each for the right to sit on his lot).

Reverse Dealer has expanded to include RVs, campers and trailers. The team also offers online appraisals and online loan applications for in-house financing.

“We price units at roughly 92 per cent of market price, meaning on average, we save people about 12 per cent more than what they would get at a dealership. That works out to an average so far of $3,000 to $4,000 on each vehicle.”

All provincial disclosure regs are followed and Reverse Dealer insists upon a CARPROOF report on every vehicle that is signed by the buyer.

Service work and mechanical fitness inspections are outsourced to a nearby shop. If work needs to be done, the shop contacts the seller directly and the seller can either reduce the price based on inspection estimate or just get the work done.

“We keep our hands out of that,” he said.

After two years of growth in Red Deer, Schellenberger’s entrepreneurial eye is looking towards national expansion.

The concept, he insisted, would work everywhere.

“Go to any town and look for used cars on Kijiji and break it down by sale by owner or sale by dealer and the number of cars offered privately is almost double. The market is double the size on the private side. That’s what we are going after. All these people want is a fair price.” 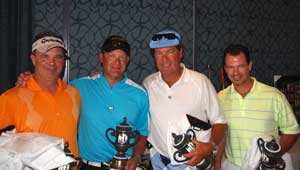 May 28, 2010 The Premier Publications Team Comments Off on Title defence at Manheim golf tourney