The awards (RVA) recognize vehicles in 27 segments, ranging from small city car to fullsize commercial van, that are forecast to retain the highest percentage of their MSRP after a four-year period for mainstream brands and three-year period for premium brands.

This year’s recipients were chosen from 2016 model year vehicles that had shown strong value in their competitive segments.

“Depreciation is the single biggest cost of vehicle ownership, and informed consumers understand the importance of resale value when making their purchase decision,” said Jim Nguyen, executive V-P and general manager of ALG.

“The ALG Residual Value Award is a meaningful achievement in the hyper-competitive automotive landscape.  Residual values are a key indicator for the market success of a vehicle, factoring in quality, product execution and brand desirability as primary drivers of ALG’s forecast.”

Among mainstream brands, Toyota edged out Honda with five segment awards, including Tundra’s seventh and the Tacoma’s sixth-consecutive RVA award.

Honda received segment awards for four of its models, including the redesigned Honda Pilot in the midsize utility segment. 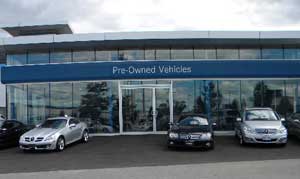 July 16, 2010 The Premier Publications Team Comments Off on Mercedes-Benz Mississauga: Just as good as new